Water intrusion into streets and temperature variations that cause freezing and thawing (expansion and contraction) below the surface will deteriorate the subsurface of a street and will eventually lead to surface cracking and potholes. Potholes are filled in as they occur, but only regularly scheduled maintenance to seal a street will prevent water intrusion and its damaging effects. 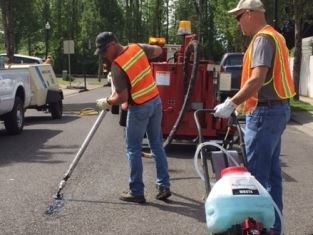 Proactive maintenance and preservation through regularly scheduled crack and slurry sealing, every 10 - 15 years after a street’s construction is the most effective method for extending the life of pavement. Established engineering studies show that a street left unmaintained after that timeline will deteriorate rapidly and necessitate a more detailed and expensive method of repair.

Below are descriptions of the various maintenance and preservation methods you may see utilized in the City of Battle Ground.

The most cost effective preservation method, crack sealing involves applying an asphalt rubber into a crack to prevent water intrusion.

A slurry seal is the application of a mixture of water, asphalt emulsion, aggregate (very small crushed rock), and additives to an existing asphalt pavement surface. This mixture seals the pavement and prevents water intrusion. Slurry seals are used on local residential streets.

A chip seal is a two-step process in which an application of asphalt emulsion is placed on a pavement followed by a layer of crushed rock. Rollers are used to bind the rock into the asphalt emulsion. It is the City of Battle Ground’s policy to apply a fog seal over the chip seal to help bind everything together. Chip seals help prevent water intrusion, but their main benefit is to provide a wearing course, which protects the asphalt underneath. Chip seals are typically used on collector and arterial streets, which are in too poor of shape to benefit from micro-surfacing.

A cape seal is a two-step process in which a slurry seal is placed over the top of a chip seal. Cape seals are typically used on local residential streets, which are in too poor of shape to benefit from a slurry seal, but where the smoothness of a slurry seal is required.

A mill & fill or overlay is adding new asphalt to an existing asphalt surface to provide a new wearing course, which protects the pavement below. A mill & fill is typically used in areas with curbing and involves removing the existing wearing course and replacing it. This is done so that the existing elevation of the road can be maintained. An overlay is typically used in areas without curbing, where road elevation is not as important, and involves placing a new wearing course directly over the top of the existing wearing course. With either method, failed areas of pavement are dug out and repaired before placing the new layer of asphalt. This treatment typically occurs at the halfway point of a roads 50-year life span. Based on funding constraints this type of treatment is generally reserved for collector and arterial type streets.